IREKA UNIT TO BUILD AN ICONIC SCULPTURE IN SANDAKAN

Kuala Lumpur, 10 April 2012: ICSD Ventures Sdn Bhd* has allocated approximately RM100,000 to design and build an iconic sculpture for Sandakan, the Nature City of Sabah. The sculpture will be placed at Sandakan Harbour Square, an urban redevelopment development located in the heart of Sandakan. The project consists of four phases, of which the Central Market and retail shop lots (Phase 1 and 2) have been completed. The project will unveil a new shopping haven, the Harbour Mall Sandakan (Phase 3) in June as well as Four Points by Sheraton Sandakan hotel (Phase 4) in May this year. The Sandakan Harbour Square is an integrated commercial development which obtained the Asia Pacific Property Awards 2009 (in association with CNBC Arabiya) in the Commercial Redevelopment category and has a gross development value of RM510 million (USD 170 million).

The SANDAKAN SCULPTURE COMPETITION 2012 is organised by Ireka Development Management Sdn Bhd and ICSD Ventures Sdn Bhd* with support from Sandakan Municipal Council (joint development partner for Sandakan Harbour Square). The competition runs from 1 March to 16 April 2012, offering cash and prizes worth up to RM30,000, including hotel stays at the Four Points by Sheraton Sandakan.

“The SANDAKAN SCULPTURE COMPETITION 2012 is meant to spur appreciation and pride towards Malaysia’s famous ecotourism destination in Sandakan,” said Lai Voon Hon, President / CEO of Ireka Development Management Sdn Bhd. “The winning idea will be ‘brought to life’ in the form of an actual sculpture to be sited at Ireka’s flagship development – Sandakan Harbour Square. We wish to also express our deepest gratitude to the Sandakan Municipal Council for their support since the start of this landmark development,” he added.

“The Sandakan Harbour Square development has contributed to the socio-economic of the Sandakan city. The city is buzzing with excitement in anticipation of the opening of the Harbour Mall Sandakan and Four Points by Sheraton Sandakan hotel by middle of this year,” said Datuk Ir. James Wong, President of the Sandakan Municipal Council who also sits on the judging panel for the competition. “We are fully supportive of this competition as the iconic sculpture located in the heart of Sandakan town is set to elevate its status as a tourist attraction for both Malaysians and foreigners,” he added.

The winning entries will be selected by a distinguished Judging Panel, which include:

“Sandakan Harbour Square is a fitting location for a public iconic art piece that connects everyone with Sandakan. The cultural artifact is envisioned to create a significant opportunity for locals and foreigners to celebrate the culture and life of the Sandakan city. The sculpture design should take into consideration the entrenched culture of its community as well as its urban influence, while remaining aesthetically-pleasing and in harmony with its surrounding. There is no restriction with regards to the choice of materials. However, thoughts should be given to the idea of sustainability and long-term maintenance,” said Ar. Chris Low Ing Ming, Director of ADC Akitek Sdn Bhd, who is the consulting architect for this project.

Further details and the Official Entry Form can be obtained at www.harbourmallsandakan.com.my 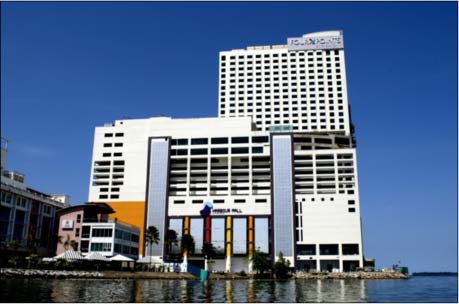