Kuala Lumpur, 12 November 2012: A wet and gloomy day did not deter the children from Rumah Kanak-Kanak Angels from having a fun and an educational outing at Petrosains with IREKA CARES volunteers.

IREKA CARES volunteer, Dominic Tee aka ‘Big Bro’ welcomed the  children and volunteers,  briefing everyone on  what to expect on the Petrosains tour, before revealing there was a quiz to complete as part of the day’s event.

Six teams were formed, comprising four children and volunteers who set off immediately after familiarising themselves with the rules and regulations for the quiz. The quiz featured various questions about the exhibits in the Petrosains centre.

Big Bro paired off with fellow volunteer, Loong Jee Yung, and Ashley and Leon from Rumah Kanak-Kanak Angels. This proved to be an awesome combination as this team eventually finished second, only narrowly missing out on the top prize! The top spot went to volunteers Vione Ha, Yap Soo Hwee and the children Samantha and Kelly

The journey began with the Dark Ride transporting the enthusiastic group on a meandering trail through the natural attractions in Malaysia, set against a dark and tranquil ambience. They arrived at Petrojaya, a cartoon village which showcased the high technology of petrochemicals portrayed through the Malaysian art of ‘Wayang Kulit’.

At the Exploration section, the children learned about the tools and techniques used in petroleum exploration and also had the opportunity to understand what’s involved in being a geologist and seismologist. A ‘singing’ Tyrannosaurus was the main attraction at Geotime Diorama and they also learnt about earthquakes, fossils and petroleum.

Those who like Formula One really enjoyed themselves at the Speed section with its race cars, training games and more. Other equally memorable experiences here included strapping in for an exciting simulator ride, that’s when the adrenaline kicked in akin to riding the roller coaster in outer space.

“The team gelled along quickly in getting all the right answers, while at the same time having fun doing all the various  activities, which did influence  the final scoring,” said Dominic Tee “Overall, it was a good bonding session with the kids, and it was great getting  to know each other better too,” he added.

As a science discovery centre, Petrosains appeals to school-going children for its fun and interactive presentation of science and technology. Each exhibit area is well equipped with detailed descriptions and user friendly manuals to cater to the enthusiastic crowd.
After close to three hours of educational learning at Petrosains, the children and volunteers finally bid their farewell to an exciting morning and headed for their lunch break.  Big Bro capped the day off by announcing the top three winners, and presented the prizes. Goodbyes were exchanged, at least until the next outing.

Ireka Corporation Berhad’s Deputy Managing Director, Datuk Lai Foot Kong said, “We are pleased that Irekians are committed towards a worthy cause that benefits the underprivileged in society. Throughout this term, we have planned a plethora of recreational and educational activities for the children, to enhance their learning and communication skills.” 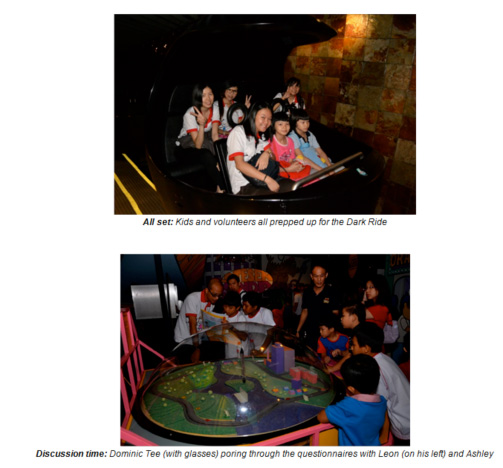 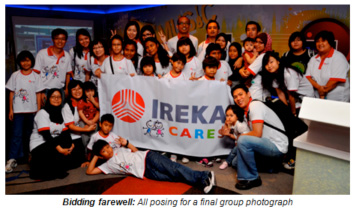