Sandakan, Sabah – 16 July 2012: Harbour Mall opens its door for business following today’s open house in Sandakan Harbour Square. This is Sandakan’s FIRST air-conditioned modern lifestyle mall offering unparalleled shopping, dining and leisure experiences – all under ONE ROOF. Predicted to be the next shopping haven in Sabah, Harbour Mall kicked off with much excitement with a large scale PC Fair which runs from 16 to 22 July 2012.

“The Sandakan Harbour Square project as a whole has provided social rejuvenation to Sabah’s second largest city, Sandakan, by creating a lot of employment and business opportunities,” said Datuk Ir. James Wong, President of Sandakan Municipal Council. “Now with the opening of Harbour Mall will definitely complement Sandakan’s position as a famous eco-tourism destination in the region,” he added.

To kick start the excitement, there will be a Shop ń Win Bonanza campaign from now till end December 2012 to reward Harbour Mall shoppers with prizes worth RM300,000 in total. With minimum spending of just RM50 (in a single receipt), shoppers can spin the Lucky Wheel and take home attractive gift items. Not only that, they are also in the running to win monthly lucky draw items worth RM1,000 each.

“We are confident that Harbour Mall will be the centre of pride and enjoyment for local Sandakanians and tourists alike, as this modern and impressive building is set to be a new iconic landmark in the town’s central business district,” said Mr Lai Voon Hon, Managing Director of ICSD Ventures Sdn Bhd said, He added: “With all the reputable brands and experienced international Mall operator CBRE on board, as well as the exciting promotional activities in the pipeline, shoppers can surely expect a rewarding and unforgettable shopping experience.”

In order to mark this significant development milestone, Sandakan Harbour Square recently organised a Sandakan Sculpture Competition with prizes worth more than RM30,000 on offer. The competition attracted students and working professionals alike from the various disciplines of architecture, arts, education, engineering and medicine. Participants were encouraged to submit their sculpture ideas that best represented Sandakan. The judges were impressed with the high standard of submitted entries.

The actual sculpture inspired by the winning design idea will be unveiled in the latter part of 2012, in conjunction with the official opening of the Harbour Mall and Four Points by Sheraton hotel. 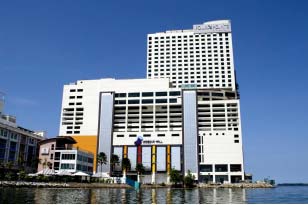 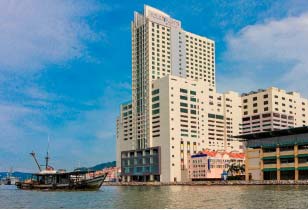