Volunteers and children enjoying comradeship and teamwork at a bowling tournament

Children from Rumah Kanak-Kanak Angels and IREKA CARES volunteers were teamed up in 6 groups to compete in three bowling games. It is commonly known that bowling helps in burning calories and works muscle groups which are not usually exercised (that explains the muscle pain!). However in the IREKA CARES’ context, beyond the physical benefits, it helped to strengthen bonds and create new friendships.

Teamwork, concentration and support – this is the winning recipe for the Champion team which consists of the Home’s founder William, children Wendy (14) and Celine (11); as well as volunteers Fakhzan and Eai Luan.

Celine and Eai Luan who could hardly bowl, were demoralised but their teammates didn’t give up on them. William and Fakhzan, who were great bowlers, tirelessly pointed out ways for improvement, the right techniques to knock down the pins; and of course how to avoid sending balls down the gutters! Wendy, on the other hand, proved to be a talented and focused bowler as she amazed the crowd with many “strikes”!

As exhaustion started to take its toll, the players’ performance slowed down.  However the teammates gave encouragement by telling each other to stay motivated, to deliver their best and to never give up. “Let’s just have fun and do our best,” the team agreed.It went on for three good hours as they enjoyed the games and each other’s company. Even when anyone of them failed in any of the frames, the teammates showed their support with comforting smiles and “high fives”.

“There was once after I missed a few shots, I hugged Celine and expressed how upset I was at myself,” shared volunteer Eai Luan, whose performance was far behind Wendy (who scored straights As in her UPSR examination two years ago). With an innocent smile, teammate Celine replied “Let’s just have fun and do our best?” Celine’s reply just went to prove how much volunteers can learn from these children, even from the smallest thing. “Wendy told me her ambition is to be a lawyer, and I’m pretty sure with her right attitude and determination, she’ll be very successful!” added Eai Luan.

The bowling tournament ended with prize giving ceremony for the Best Bowlers Abby (7 – 9 years old category), Leon (10 – 12 years old) and Samantha (13 – 16 years old category). Wendy and Celine capped off the session with a happy grin, as they received the prize for the Champion Team. They bid goodbye to each other after lunch, which was filled with plenty of banter and newfound friendship bonds. 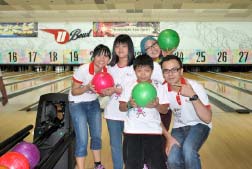 Volunteers Irene, Airin, and Rool having fun together with Michelle, 13, and Leon, 12. 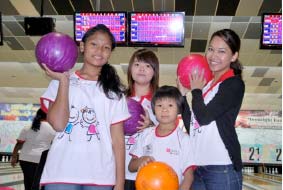 Volunteers Ashley and Yvette with Esther, 15, and Ann, 9. 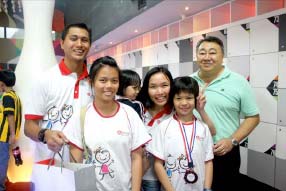 Children Wendy and Celine all smiles together with Champion teammates Fakhzan, Eai Luan and William. 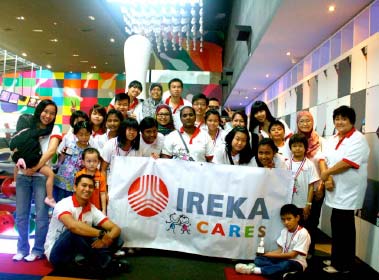 Volunteers and children enjoying comradeship and teamwork at a bowling tournament.