Kuala Lumpur, 21 May 2012: The Sushi Boys, that’s what the boys from Rumah Hope called themselves after successfully accomplishing their feat of assembling their own sushi platter. They were amongst the 40 children of Rumah Hope who participated in the recent IREKA CARES’ Sushi-Making Workshop, organised under Ireka’s flagship Corporate Social Responsibility (CSR) programme.

Being first-timers themselves, The Sushi Boys  (Berlock A/L Ahmad, 13, James Lim, 13, Kuntum A/L Asot, 13, Paul Teh, 13, Chong Chee Wai, 14, Srigan Nayako, 14, and Chin Kar Kit, 15), were intrigued by the meticulous step-by-step process of making sushi. The girls were as fascinated and found the task equally challenging. “It looked harder than we thought, especially shaping the sushi rice into a consistent shape while making sure the rice doesn’t break apart, ” said a smiling Esther Lee, 14, with her neatly pressed sushi logs. Her friend, Vanni, 16, quipped, “After some trials and errors, we’ve mastered the trick! Itadaki-masu!”

After a briefing by T-Garden Cooking School (whom Ireka engaged to conduct the Living Skills workshop), the children were divided into 2 groups according to age. With guidance fromIREKA CARES volunteers, the older children were taught to shape the sushi rice base. These rice logs were then ‘transformed’ into scrumptious gunkan sushi (‘battleship’ sushi for its resemblance to tiny ships) secured with nori sheets (seaweed) and filled with various toppings of chuka wakame (shredded Japanese seaweed), tuna, kani (crabsticks), ebikko (fish roe); or inserted into inari (sweet-flavoured fried tofu pouches).

Ireka Corporation Berhad’s Deputy Managing Director, Datuk Lai Foot Kong said, “Our aim is for the IREKA CARES’ initiatives to develop the children’s living skills which leave a more lasting impact. Through workshops such as sushi-making, the children learn about ingredient preparation, food hygiene and presentation. We also believe they can utilise this skill for their future fund raising events. I am pleased that the Rumah Hope children enjoyed themselves, in the company of our Ireka volunteers.”

Rumah Hope started in 1994 as a sanctuary for abused, abandoned, neglected and underprivileged children between the ages of 5 to 17. Since July 2011, Ireka volunteers had been organising different artistic activities on monthly basis such as making clay pottery, fridge magnets, batik painting, friendship bracelets, and cross-stitching as well as lessons in the performing arts (dance, drama and singing) under the IREKA CARES’ Arts banner. T-Garden Cooking School, established in 2011 and based in Cheras, offers culinary lessons in baking, cooking and sushi craft for both adults and children. 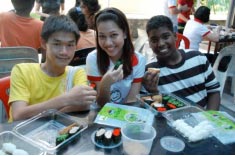 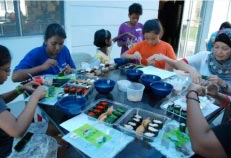 Rumah Hope children topping ingredients to their gunkan sushi together with volunteer Nor Fathiyyah. 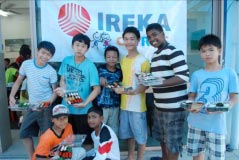 “We are The Sushi Boys!” 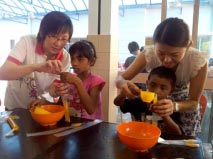 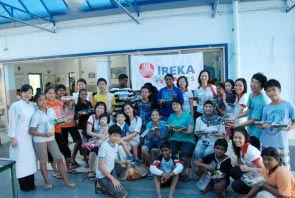