Kuala Lumpur, 24 December 2012: “Rudolph, the red-nosed reindeer, had a very shiny nose”…IREKA CARES volunteers kick-started their Christmas Party at Rumah Kanak-Kanak Angels with this song; only to pre-empt the children having a great time decorating their own Rudolph cupcakes.

The children were excited when IREKA CARES volunteers guided them on how to design the five different Christmas-themed cupcakes. While some were busy straining icing sugar on stencils to design Snowflakes cupcakes; some ‘set up’ Christmas Trees with green swirled icing, silver balls and colourful sprinklers.

They even gave the humble strawberry a creative twist by turning it into a Santa Claus Hat, with piped icing for the brim. For Samantha, 13, her favourite was turning marshmallows, jelly bean, jelly candy, chocolate chips and sour strips into Frosty, the Snowman. On the other hand, Abby, 7, shared that she likes her cute and cheeky Rudolph especially the delicious ‘pretzels’ antlers.

“The happy glow on the children’s faces as theyproudly put up their name flag on their decorated cupcakes speaks for itself,” said volunteer, Tan Bee Hong who helped on the Rudolph cupcake station.

Following a scrumptious lunch, IREKA CARES volunteers serenaded the Home’s children, care givers as well as the Ireka Management with a medley of Christmas tunes. Led by volunteer Irene Sim, together with guitarists Nicholas Yee and Brendan Yee, the volunteers belted out all-time-favourites that included Jingle Bells, Rudolph The Red Nosed Reindeer, Feliz Navidad, Santa Claus is Coming To Town and Deck The
Halls.

The caroling put everyone in the festive spirit, thanks to the volunteers (who rehearsed during lunch hour prior to the party) and two boys Jimmy, 8, and Leon, 11, who sang their hearts out. The children then amazed the guests with their own caroling with Joy to the World and Silent Night.

Thereafter, Ireka Corporation Berhad’s Group Deputy Managing Director, Datuk Lai Foot Kong, dedicated his appreciation to the Home and volunteers. Datuk Lai then handed over an IREKA CARES adoption plaque to William Chang, the Home’s founder. To add on to the Christmas cheer, IREKA CARES presented the Home with their first Christmas tree, decorated with baubles and ornaments.

Before the volunteers and children meet again in January for their bowling outing, the children received their presents and concluded the party with a joyous song, We Wish You a Merry Christmas. To quote care giver, Belinda Chew, “Thank you very much for everything, everyone is so happy,” – which makes it all worthwhile. 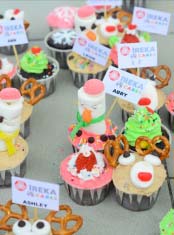 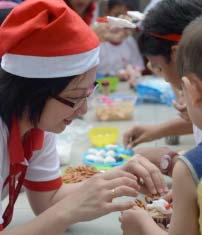 Wendy, 13, with and her Snowman cupcake and volunteer Sumithira.

Front row, 2nd and third from right) Leon and Jimmy singing their hearts out together with volunteers.

Special performance by the little ‘angels’ liven the festive mood.