The joyous occasion was attended by the Management of Ireka, as well as over 30 IREKA CARES volunteers. The celebration was especially meaningful as volunteers visited the home with personalised Christmas gifts for their own ‘adopted’ child.

After months of training under the Performing Arts outreach programme sponsored by IREKA CARES, the children put up a splendid performance of dance and drama, much to the delight of the Home’s caregivers and the IREKA CARES volunteers. First up was an energetic dance, a flawless combination of hip hop and breakdance performed by the Home’s 10 – 14 years old children. As the children grooved to the upbeat rhythm of “Mercy” by Duffy, thunderous applause by the IREKA CARES volunteers served as a great encouragement boost to these children.

The next drama performance, a rendition from the children’s favourite classic but given a new twist in the form of Jack and The Magical Baked Beans! From main characters Jack and Mommy, Buttercup the Cow to even the market peddlers, it was heartwarming to see the children confidently acting out their lines with convincing facial expressions. The well-timed flash cards in the background encouraged two-way interaction as they prompted the audience to cheer and chant along to the words.

“It was simply amazing to see the children performing with great enthusiasm and passion. I’m positive the children will benefit greatly from the performing arts, especially when given the proper guidance and nurturing from a young age, That is the reason why IREKA CARES 2011/ 2012 chose to focus on ARTS.” said Leonard Yee, Group General Manager of Ireka Corporation Berhad.

The children also owed their thanks to Lorna Hoong, who has been engaged by IREKA CARES to teach the dance and drama to the children at Rumah Hope. No stranger to the arts scene, Lorna is actively involved in theatrical dance and film production locally. “Throughout the journey of self-expression through arts, the children learn to hone their talents and boost their self-confidence,” beamed Lorna who was very proud of the children’s performance.

Having adopted Rumah Hope since July 2011, IREKA CARES had conducted some ARTs activities under three categories which are Arts & Craft, Living Skills and Performing Arts. Earlier on, there was Housewarming Party to commemorate the official adoption of the Home, followed by clay pottery and friendship bracelet craft weekend activities.

Rumah Hope started in 1994 as an outreach of Good Hope Church in aid of 5 needy children and as a sanctuary for abused, abandoned, neglected and under-privileged children between the ages of 5 to 17. The Home is a sanctuary that provides love, peace, warmth, comfort and security for the children while ensuring they get to continue their education for a solid future. Rumah Hope today is home to 38 children. 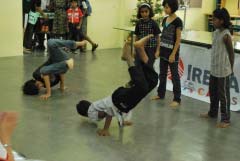 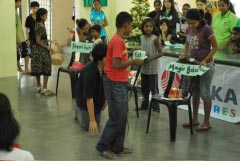 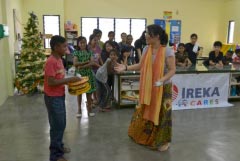 Personalised gifts for the children from all volunteers 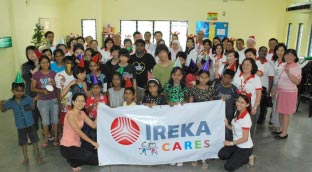