Sandakan, Sabah – 30 May 2012:  Ireka is proud to present Sandakan’s only international brand hotel – the Four Points by Sheraton Sandakan (‘FPSS’).
FPSS is part of Sandakan Harbour Square, which is developed byICSD Ventures Sdn Bhd (a subsidiary of Aseana Properties Ltd/ ‘ASPL’) together with

the Sandakan Municipal Council as its joint venture partner. The integrated commercial development also clinched the much-coveted Asia Pacific Property Awards (Commercial Redevelopment category) in 2009.
“As the development manager, we are thrilled to bring in the ‘Four Points by Sheraton’ brand into Sandakan, for its presence will enhance the city’s modernisation and tourism appeal. I am sure the hotel will add colour and vibrancy to Sandakan Harbour Square too,” said Lai Voon Hon (President / CEO of Ireka Development Management Sdn Bhd) during the soft opening ceremony on 30 May.

Commenting on the partnership, Chuck Abbott, Regional Vice President of Starwood Hotels & Resorts (South East Asia) adds, “Starwood has had the pleasure of working with Ireka on several projects, all of which were managed successfully with utmost professionalism. Now with the timeless and stylish comfort offerings by Four Points by Sheraton Sandakan, we believe the hotel will help elevate Sandakan’s hospitality industry to international levels.”

Featuring a gorgeous view of the Sulu Sea, each of the 300 FPSS guestrooms is bright, cheerful, and stylishly designed with contemporary touches. The only hotel in the city to offer Executive Club facilities, the Four Points by Sheraton Sandakan is set to be the ideal choice for travellers looking for convenience and comfort whilst on business.
In addition to catering to dining aficionados, the Four Points by Sheraton Sandakan is also ideal for conferences as it houses the largest meeting space in the city. The ballroom and meeting rooms (totaling close to 1600 square meters) are perfect for meetings, events or social functions. Alongside state-of-the-art meeting and banqueting facilities, the hotel also offers a gym and an inviting outdoor pool located on the 13th floor where you can enjoy a scenic afternoon with breathtaking views of the harbour and the city of Sandakan.

Situated in the new Central Business District (CBD) and at the heart of Sandakan city, Sandakan Harbour Square consists of Four Points by Sheraton Sandakan hotel, a Central Market (market and fish jetty), town square and waterfront esplanade (for community events), commercial shop offices, as well as a five-level Harbour Mall Sandakan shopping mall. Sandakan Harbour Square aims to provide a catalyst for social rejuvenation and modernisation of Sandakan, by enhancing its charm as a tourism destination as well as a vibrant commercial hub. 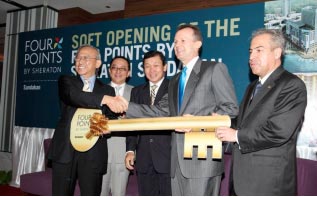 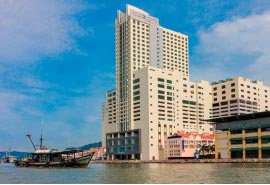 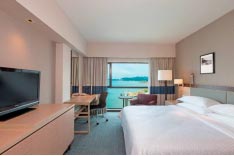 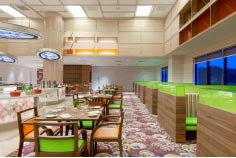