Kuala Lumpur, 30 September 2013: Ireka Corporation Berhad (‘Ireka’) goes into the current financial year with key construction projects under its belt and an order book that has hit RM1.1 billion.

Speaking at its 37th Annual General Meeting today, Group Managing Director, Lai Siew Wah said, “I am proud that we were able to complete and deliver on a number of key construction projects in the last year. This provides us all with a sense of achievement. With the size of our order book hitting RM1.1bn, we can look forward to a busy few years ahead as Ireka also intends to expand its property development business.”

In FY2012, Ireka had successfully completed the construction of a number of key projects including the Harbour Mall and Four Points by Sheraton Hotel in Sandakan; the main building works for KL Sentral office towers, the adjacent Aloft Kuala Lumpur Sentral Hotel (‘Aloft’) and City International Hospital in Ho Chi Minh City, Vietnam. The latter was launched on 24 September and is already operational. The Aloft hotel opened for business in March 2013 and is today, Trip Advisor’s top 10 hotels for Kuala Lumpur.

The Group’s Technologies division, i-Tech Network Solutions, grew its sales revenue by 147% in FY2013 compared to the previous year, helped significantly with the completion of networking and systems integration projects for key clients during the period. i-Tech’s ‘green’ data centre in
Mont’ Kiara, branded as SAFEHOUSE, is now well underway, offering co-location and disaster recovery services. It won the Schneider Electric IT Malaysia for Adoption on Energy Efficient Solution Award 2013.

On its property development activities, Ireka has launched two projects: The RuMa Hotel and Residences in the heart of Kuala Lumpur’s Jalan Kia Peng which is a joint-venture project with Aseana Properties Limited** and Kasia Greens homes, a new garden township situated in Nilai, Negeri Sembilan. Sales on both developments have been encouraging to date.

Reflecting on the Group, Lai said, “We remain committed to enhancing shareholders’ value. With our strategy in place, I am confident we will continue to deliver improved services across the Group.

For the financial year ended 31 March 2013 (FY2013), the Group recorded total revenue of RM329.9 million as compared to RM429.9 million recorded in the previous year, which is attributable to a reduction in revenue in the construction segment. The construction order book in the year decreased significantly due to completion of major projects and delays in replenishing new projects.

Loss before tax was RM38.4 million compared to a profit before tax of RM14.1 million for the previous year largely due to a share of loss of Aseana, of RM19.7 million and losses incurred by the construction segment mainly as a result of the significant reduction in revenue. 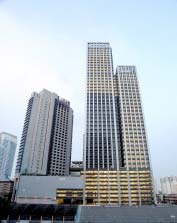