Kuala Lumpur, 8 August 2015: Children from the Rumah Hope, Rumah Kanak-Kanak Angels, Lighthouse Children’s Home and IREKA CARES volunteers took part in a day full of competition and team spirit on Saturday, 8 August, 2015. It was the IREKA CARES Finale event where modern games were mixed with traditional ones. From sack race to the Gladiator challenge, to bouncy castle assault courses and tug-of-war, the Bukit Kiara Club field was full of mini athletes participating and cheering on their peers. Children from 6 to 17 years took part, along with volunteers who sometimes stepped in to help, particularly in the tug-of-war challenge. The trumpet fanfare accompanied by the “Chariots of Fire” theme tune kicked off the event with the children marching in behind their House team banners appropriately named, Iron Man, Incredible Hulk, Minions and Captain America – and the raising of the IREKA CARES banner. Even the weather behaved itself and the threatening downpour did not happen until after it was all over.

The fun day organised by IREKA CARES volunteers was both a special and important one for the Company because it marked the end of our Corporate Social Responsibility (CSR) programme in its current form which began in 2010. It is hard to believe that the IREKA CARES journey started 5 years ago and its sole purpose is to make a difference to the lives of the children through the direct involvement of staff. In the last five years, Ireka has been proud and privileged to have worked with the Lighthouse Children’s Home, Rumah Hope and Rumah Kanak Kanak Angels.

After a morning of trying their very best, the worn out children and volunteers were treated to a scrumptious buffet lunch with a vast selection of food – the ABC counter was particularly popular with the young and old!

According to IREKA CARES’ Year 5 Action Committee Head, Mr KB Yap, “It was wonderful to see the children having so much fun and generally enjoying themselves with each other. It has been an honour to have led the Action Committee in the last year. A BIG well done to all the 64 children who took part in the day and thank you to all those volunteers who helped make the event so successful!”

The last word is given to Datuk Lai Foot Kong, Ireka’s CSR Steering Committee ‘IREKA CARES’ Chairman who proudly announced, “I want to thank and pay tribute to the many Ireka volunteers from across the organization, who have committed their time to contribute to the betterment of the children’s lives, drawing on our expertise in our core businesses of Infrastructure, Real Estate and Technologies over the last 5 years. Ireka owes each volunteer a debt of gratitude because they have put so much effort into taking the CSR programme forward and I am especially proud to have been its Chairman during this time.” 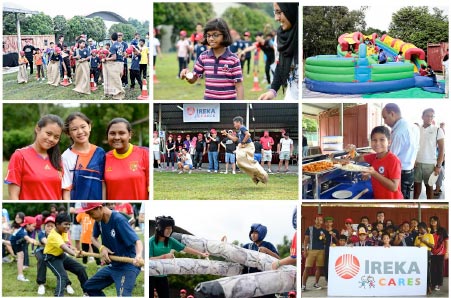 The children having fun time during the games session, from sack race to the Gladiator challenge, to bouncy castle assault courses and tug-of-war. 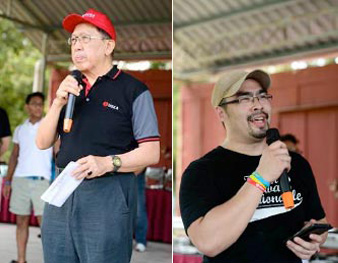 Group photography of the IREKA CARES volunteers and children from the Rumah Hope, Rumah Kanak-Kanak Angels and Lighthouse Children’s Home.