How do you Sleep?
20735
post-template-default,single,single-post,postid-20735,single-format-standard,bridge-core-3.0,qodef-qi--no-touch,qi-addons-for-elementor-1.5.3,qode-page-transition-enabled,ajax_fade,page_not_loaded,,overlapping_content,qode-theme-ver-28.4,qode-theme-bridge,disabled_footer_top,qode_header_in_grid,wpb-js-composer js-comp-ver-6.9.0,vc_responsive,elementor-default,elementor-kit-21820

How do you Sleep?

Posted at 18:07h in Newsroom by Tiggy Munnelly
0 Likes
Share

Ever wondered how much sleep you actually need to function effectively? Is it true that the older we are, the less sleep we need? What are the dangers of not having enough sleep? Does using our phones, tablets and other electronic gadgets before bedtime really impact on our sleep? During the Coronavirus pandemic when much of the world was in lockdown, questions on how much is enough sleep or even being able to get to sleep were heightened because of the disruption to daily life, rising levels of anxiety and worry; not to mention excess screen time (in my case)!

Sleep Health expert, Dr. Christopher Barnes, Professor at the University of Washington’s Foster School of Business has made this issue his life’s work because, according to him, “Sleep health matters because we should care about people. I find this to be such an important topic that I have devoted my career to studying it.”

It was a privilege to attend a talk by Dr. Barnes, on his visit to Malaysia just before lockdown, on the significance of sleep deprivation on everyday life and the benefits of getting enough sleep. There is nothing he doesn’t know about the subject and still he says there is plenty to learn – more on this later.

How would you even begin a journey into this area to study, never mind become a world expert in the subject? Dr. Barnes’ journey started with his time serving as a Lieutenant in the United States Air Force stationed in the Air Force Research Laboratory’s Fatigue Countermeasures Branch. There, he was involved with sleep related research, and found it both fascinating and important because for the Air Force in particular, many pilots and other air crew must engage in missions which are incompatible with unhealthy amounts of sleep and also the timing of sleep. So it is really important for the Air Force to be able to understand and potentially mitigate the risks involved in these sleep deprivation profiles.

Dr. Barnes’ research in the Air Force thus led him to believe that many people throughout the world do not sleep enough or at least, do not sleep well which has important implications not only for their health but also for how they function at work. This is when he decided to leave the military to pursue a PHD and an academic career focused on studying sleep.

So why should we care about sleep?

• The first reason we should care about sleep is because it is fundamentally important to our health. Just about every health outcome you can think of is influenced by sleep. In short, you will live a longer, healthier life if you get the sleep you need.

• Beyond health reasons, we should care about sleep because it influences our work. Sleepy employees are less effective employees. They are more likely to make mistakes and more likely to engage inapprotriate activities, like cyberloafing. And YES, there is research to back this up!

• More generally, we should care about sleep because it influences leadership both in and outside the work context. Sleepy leaders are less effective leaders, and undermine the effectiveness of their staff teams.

Sleep is for wimps 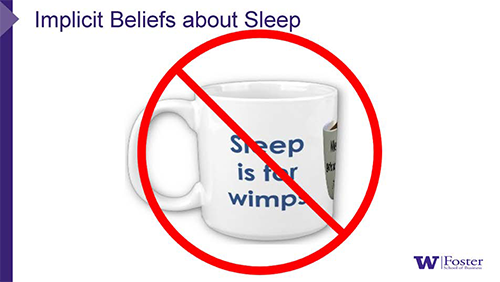 The late Margaret Thatcher, UK’s first woman Prime Minister, is said to have famously declared that “sleep is for wimps”. Another great British leader, Sir Winston Churchill also famously claimed that by sleeping for only a few hours every night enabled him to pack a day and a half worth of work into a single day. American rock singer and song writer spoke for many successful people when he said, “I’ll sleep when I am dead!” So why is there this prevailing attitude that success comes to those who put in the long hours, which often means foregoing sleep or believing that sleep is a necessary evil. Sleep is held an obstacle to becoming influential, powerful and productive; and should not be celebrated. I suppose it is that while awake, you can be actively making a profit, growing your organization or reaping greater rewards – in other words, ACHIEVING SUCCESS!

Dr. Barnes definitely does not see sleep deprivation as a badge of honour to be proud of because his studies have shown that successful insomniacs are the exception rather than the rule.

According to him, 30% of Americans get less than 6 hours sleep per night and in the UK, the National Health Service (NHS) concluded that 1 in 3 people say they don’t get enough sleep; and in Malaysia, a New Straits Times article published in January, 2019 put the figure for Malaysians being sleep deprived at a staggering 9 out of 10 people.

So, what does it matter?

We already know that sleep has both restorative and rehabilitative benefits, which means it is an important part of physical and mental health, including memory improvement and general well-being. This is why some professional athletes will hire sleep consultants to help ensure that they have enough sleep and they even build longer sleep time into their schedules to enhance performance.

So, can we ever catch up on lost sleep? The good news is that the debt can be repaid with recovery sleep – i.e. going to bed early to catch-up or having short naps to replenish. Whilst this is not as effective as a good 7 or 8 hour stretch, it’s better than amassing the debt. Earning back the lost sleep can be rejuvenating and helps makes us feel well rested – finally, an irrefutable reason, backed by research, to have a lie in! 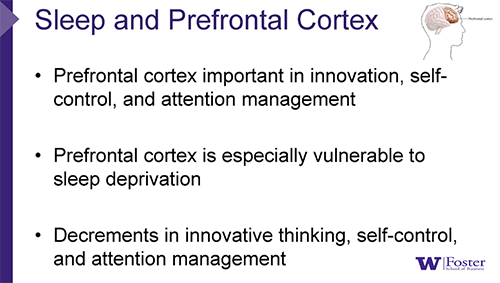 Napping is also often underestimated and gets a bad rap as being synonymous with laziness. However, much of the sleep research shows that dozing for even 20 minutes can be restorative and increases stamina for keeping attentive.

According to Dr. Barnes, when our sleep debt accumulates, this causes memory failures, distorted risk analyses, overestimation of ability and accuracy, not to mention speed and accuracy losses in thought processes. Add to the mix poor creativity, bad decisions, distractions resulting in injuries, more difficulty controlling emotions, less helping behavior and most unexpected of all, cyberloafing. Using work time on unrelated online activities whether it is the web, perusing new sites or watching Korean movies is cyberloafing and Dr. Barnes claims that we are more prone to this activity when we are sleep deprived because tiredness makes us less able to self-regulate and be less disciplined.

He goes on to say that 4 consecutive 5-hour sleep nights is equivalent to having a blood alcohol concentration of 0.6% which means it’s like functioning continuously under the influence. The science tells us that the prefrontal cortex of the brain, responsible for acts like innovation, self-control and attention management is especially vulnerable to sleep deprivation so it is obvious what happens when we don’t get enough sleep. Basically, the message is clear – we ignore the benefits of getting enough sleep at our peril. It might seem that we are wasting precious hours resting but studies by experts like Dr. Barnes have proven otherwise. In other words, listen to the science!

Getting a regular 7-9 hours’ sleep, regardless of whether we are 22 or 92 years old is important because the problems caused by sleep shortage go beyond tiredness. Health conditions including heart disease, diabetes and obesity can also be brought on by the ongoing lack of sleep. For young children, 2-year- olds for instance, they need close to 12 hours of sleep to promote optimal health as their brains are still developing and sleep deprivation causes a reduction in growth hormone and muscle maintenance. How many times have we witnessed the inattentive and disruptive sleep deprived child? 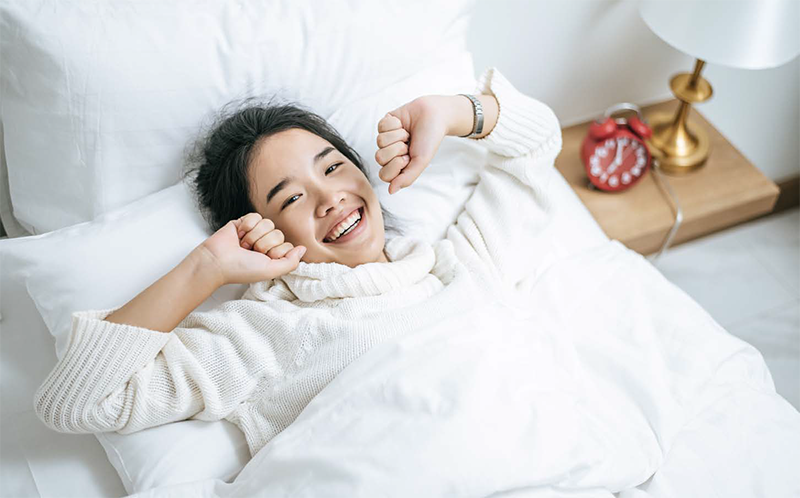 The good news is that it is not too late to adopt healthy sleep practice, what Dr. Barnes calls sleep hygiene which is basically about habits we have to practice to enjoy good quality sleep in order to be fully alert during the day and to perform at our peak. He urges us to do the following:

• Consistent pattern of going to bed early.
• No television in the bedroom. In fact, keep electronics in a separate room.
• Stop using electronics at least an hour before bedtime.
• No caffeine/nicotine/alcohol near bedtime.
• Exercise, but not within a few hours of bedtime.
• No activity in bed other than sleep or sex!

Dr Barnes’ proudest achievement is that other researchers in management and applied psychology are now conducting research on sleep without including him. That doesn’t sound like an achievement, but when he started conducting this research sleep was a topic that everyone ignored. So, for it to be a sufficiently legitimate topic for others to now study means that things have come a long way.

Dr. Barnes is already well published in some of the most prominent journals, his media mentions (including a TEDx Talk video, “Sleep Well to Work Well”) are as long as my arm; and the impressive Honours and Awards received acknowledge his accomplishments in the world of sleep studies – so, what’s next?

Continued learning is top of the list. As if he is not busy enough, Dr. Barnes is currently undertaking a Masters course in Sleep Medicine at the Nuffield Department of Clinical Neurosciences, Oxford University, England.

At the same time, Dr. Barnes is researching solutions for addressing sleep-deprivation issues in the workplace looking at both the effects of sleep on work as well as the effects of work on sleep. He describes his research as examining human sustainability.

As life’s busy-ness picks up following 2 months of enforced lockdown for most of the world, due to the global pandemic, getting enough sleep will once again be a casualty of modern living. For sure, Dr. Barnes will have his work cut out for a long time to come!

(Much of the information on sleep taken from Dr. Barnes’ talk in March 2020, “Employee Sleep Matters for Work Outcomes.”)