Posted at 10:00h in Newsroom by Tiggy Munnelly
0 Likes
Share

The Nilai Town Council (Majlis Perbandaran Nilai – MPN) invited Ireka to participate in the “Wall Street Art’ Nilai Town Beautification Project which we were proud to do so. The objective is to invite developers with projects in the area to participate in an initiative to paint murals on a stretch of shop house walls in the old town area. Ireka’s Rimbun Kasia devlopment is in the Nilai district.

The professionally drawn murals are expected to beautify and give a fresh look to the area. The Council has plans to publicise the area after completion of the murals with a media launch of the works (jointly with the Ministry of Tourism) to coincide with Visit Malaysia 2020. Nilai is the local authority that Ireka’s Rimbun Kasia development is sited in.

Taib bin Abdul Razak, aka Taib Aur, was commissioned to produce the Ireka mural which had a Malaysian cultural theme of 3 young girls celebrating their festivals. The beautiful piece of wall art was praised by both Ireka’s management and Nilai Council for its vibrancy and theme.

Graduating from Politeknik Johor Bahru with a Diploma in Industrial Design in 2002, Taib found work at Grand Banks Yachts (M) Sdn. Bhd. as a designer in the R&D department starting as a draughtsman and finished as executive designer when he left in 2009. He seriously started drawing in 2006 where he tutored under an experienced portrait painter, Ismail Attan. In 2007, Taib started a souvenir and painting business at Plaza Seni, Johor Bahru and eventually in 2016, he moved to Kuala Terengganu to open an art shop in Pulau Duyon, Kuala Terengganu where he continues to work from this base.

Getting into Mural Art

Most of the murals are sited around Johor and Terengganu. The largest mural in Terengganu is at the Payang Market parking lot. In Johor, there are two murals that are special to Taib – one is a joint mural in the Petronas program (#tanahairku 2015) and the other is at the Laman Pesona, Kluang (Kluang Charming Site) by the Majlis Perbandaran Kluang where the mural celebrates the arrival of the Sultan of Johor during the Kembara Mahkota Johor (Crown Prince’s Journey). Nilai is the first place Taib created his mural work outside Johor and Terengganu.

Taib derives inspiration and learns from a spectrum of artists but he is clear not to imitate them because he wants to have his own style. For murals, Taib prefers to highlight local Malaysian culture. Mural is an art for the public and Taib wants visitors who come from outside the area to know the local culture through the murals he creates. He sees mural art as a performance because the public get to see the work as it is being created. This, according to Taib, is a powerful way of communicating with the public because there will always be a reaction, good or otherwise. 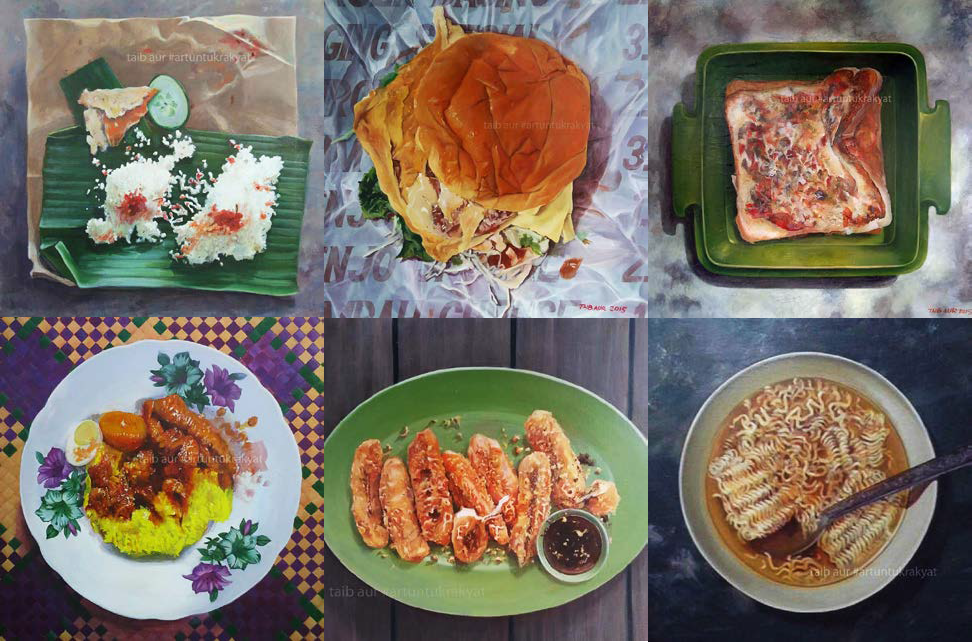 Taib admits that he is never satisfied and loves the challenge of keeping up with changing art trends. He says sagely, “The trend of murals will change. Who knows, maybe in the future sculptures or other trends will become trendy. As a painter, I have to be always alert and ready to meet what’s in demand.”