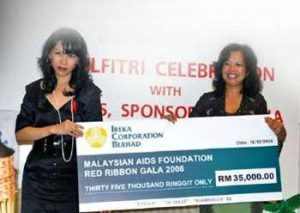 In conjunction with the Red Ribbon Gala 2008 held on 25 October 2008, Ireka Corporation Berhad contributed a donation of RM35,000 in aid of the Malaysian AIDS Foundation (MAF). MAF is committed to creating a safe environment, free from the harm of HIV/AIDS, as well as in educating the public, families and friends of people living with AIDS, national and local authorities on matters relating to HIV/AIDS prevention. MAF is also dedicated in rendering financial support to the people living with HIV/AIDS to minimise the negative impacts caused to their livelihoods